4 Times When Virat Kohli Got Angry in the Press Conference

King Kohli’s batting needs no introduction and he already has the most test wins for an India. He took India to no. 1 position in 2019 and 2020. He has built probably India’s best bowling attack in years. Virat has built a team that is not afraid to tour away from home conditions. Indian fans have been left pleasantly surprised to see a bowling quartet in the Indian side. He took over the Test captaincy from Dhoni in 2014 and the ODI captaincy in 2017.

Kohli is infamous for being aggressive and fiercely competitive on the field. He has maintained that it is his way to deal with situations. However, there have been times that attitude has spilled out of the field. Being the captain, he has had to face the media on multiple occasions. During some of these interactions, Kohli has been irked by their questions and responded angrily.

We look at 4 such incidents when Kohli did not respond kindly in a press conference.

After India lost the test series in South Africa in 2017, Kohli was harshly questioned by the reporters about the constant chopping and changing of the team in the past 30 test matches. They tried to indicate that India was losing because he did not stick with a definite team. Kohli angrily questioned how many tests India won out of the 30. He went ahead to aggressively state that India had managed to win 21 matches and draw 7 and lose just 2.

India played two tests in New Zealand in 2020 and lost both. Virat Kohli lost his cool as a journalist during a post-match conference in Christchurch after the Kiwis defeated India by 7 wickets in the 2nd Test match. Kohli was asked whether he needs to tone down his aggression on the field to which he replied, “What do you think? I’m asking you the answer. You need to find out what happened & come with a better question.” He also snapped at the journalist saying, “If you want to create controversy, this isn’t the right place to be.”

India was playing a four-match series against Australia and had lost the first test in Pune. They came back strongly in the second test in Bangalore and won comfortably. In the match, when Steve Smith was batting he was given out by the on-field umpire. Smith looked up at his teammates in the balcony for confirmation before going for the DRS. He created plenty of controversy and Kohli was furious about it. During the press conference, he stated that there was a line that should not be crossed on the field and how he would never do something like this on the pitch. He stopped short of calling Smith a “cheat”.

India toured England for a 5 match series and lost it 1-4. In a press conference after the 5th test, the reporter asked “The Best Indian team in the last 15 years! Do these tags put pressure on you? Do you actually believe you are?” This was a reference to Ravi Shastri’s comments about this Indian team being the best in the past 15-20 years. Kohli replied with a deadpan face “We have to believe we are on the best side. Why not?” When the journalist said he did not agree, Kohli retorted with “You’re not sure? That is your opinion. Thank you.” Shreyas Iyer comments on Franchises decision to remove him from Captaincy 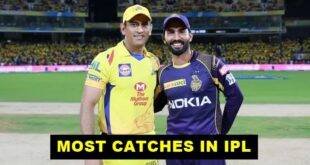 5 Wicketkeepers with most Catches in IPL